The 2020 International Celtic Congress was to have been held at Aberystwyth hosted by the Cymru branch of the Internatuional Celtic Congress. However, although plans had been made for all the other branches of the Celtic Congress to attend including Alba (Scotland) Breizh (Brittany) Eire (Ireland) Kernow (Cornwall) Mannin (Isle of Man) this was not possible dur to the COVID-19 Coronavirus pandemic.

It was agreed that the Cymru branch would again host the 2021 congress the ongoing uncertainty around the pandemic meant that this was not possible, but they would hold a virtual online congress. This ambitious online event was far more viable as over the previous 12 months the public had engaged with online events to a far greater extent.

The International Celtic Congress virtual will be held between Friday 2nd to Sunday 4th July. More information will be added here and to our Facebook page at Celtic Congress Scotland (A' Chomhdhail Cheilteach Alba

A pdf of the programme of events can be seen as a pdf by clicking this link - This will be made available as soon as it has been published.

Held between 25th to 30th April this years theme for the Celtic Congress was 'Recording our Past to help inform our Future'. The activities consisted of lectures by speakers from each Celtic nation along with music, cèilidhs and visits to places of historical and  cultural interest throughout Cornwall. This included a visit to the new Kresen Kernow building the repository of Cornwall's national archives. 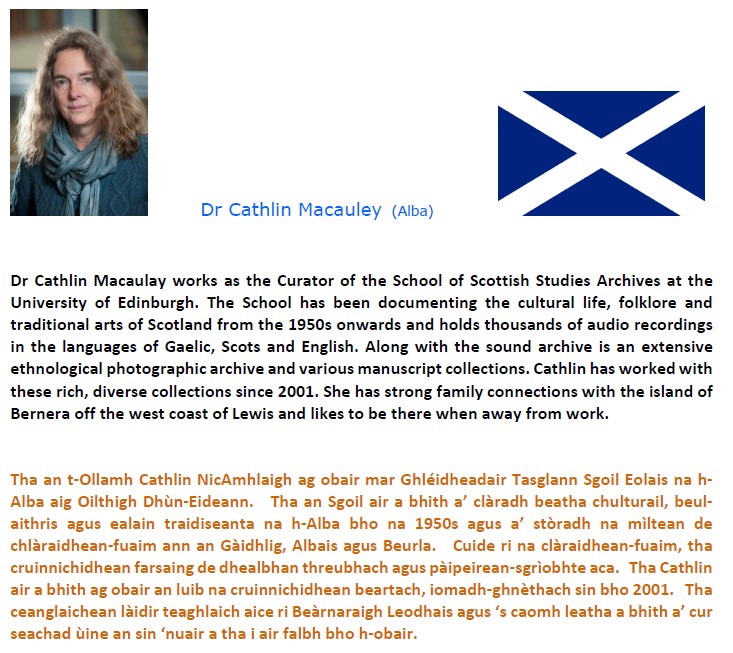 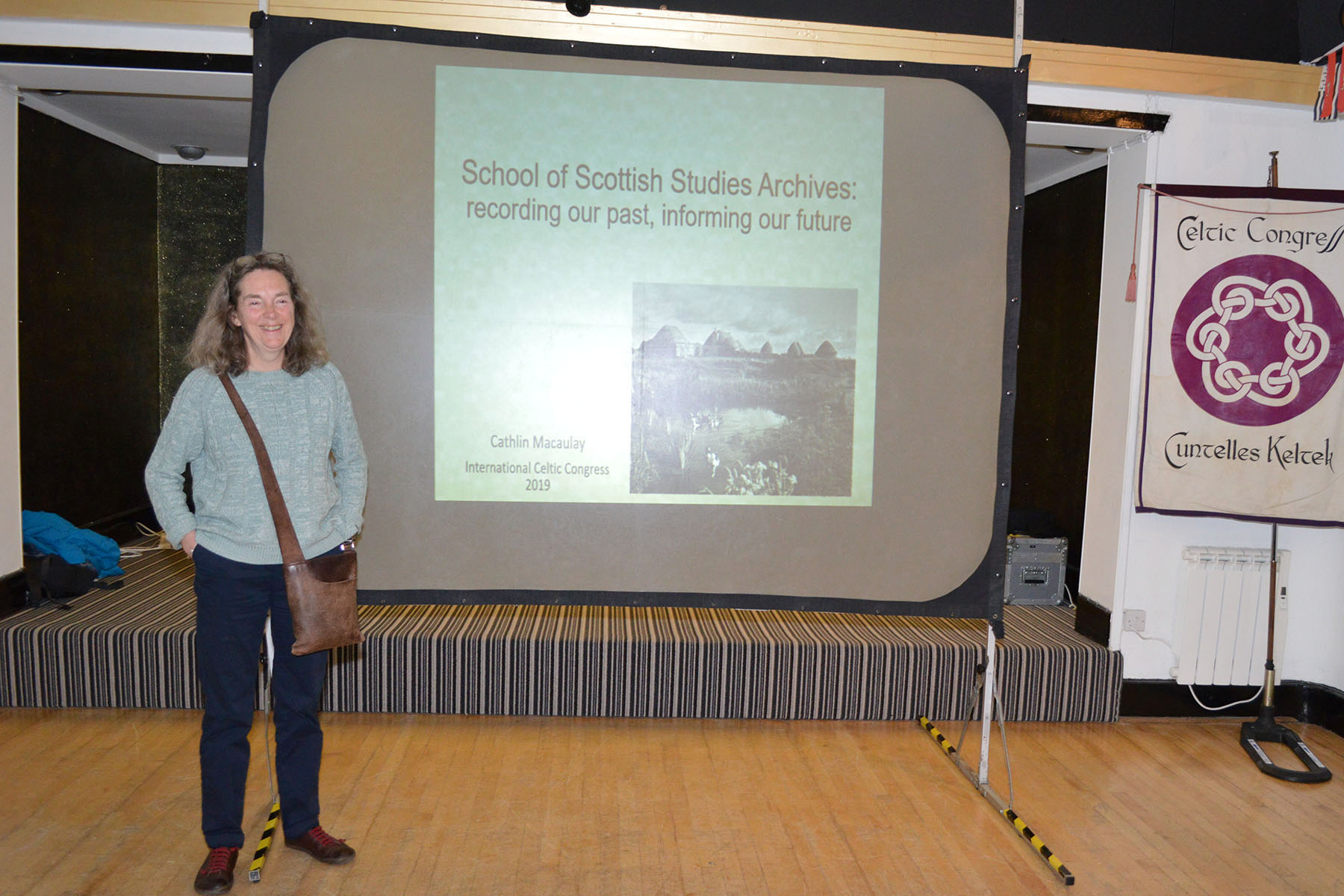 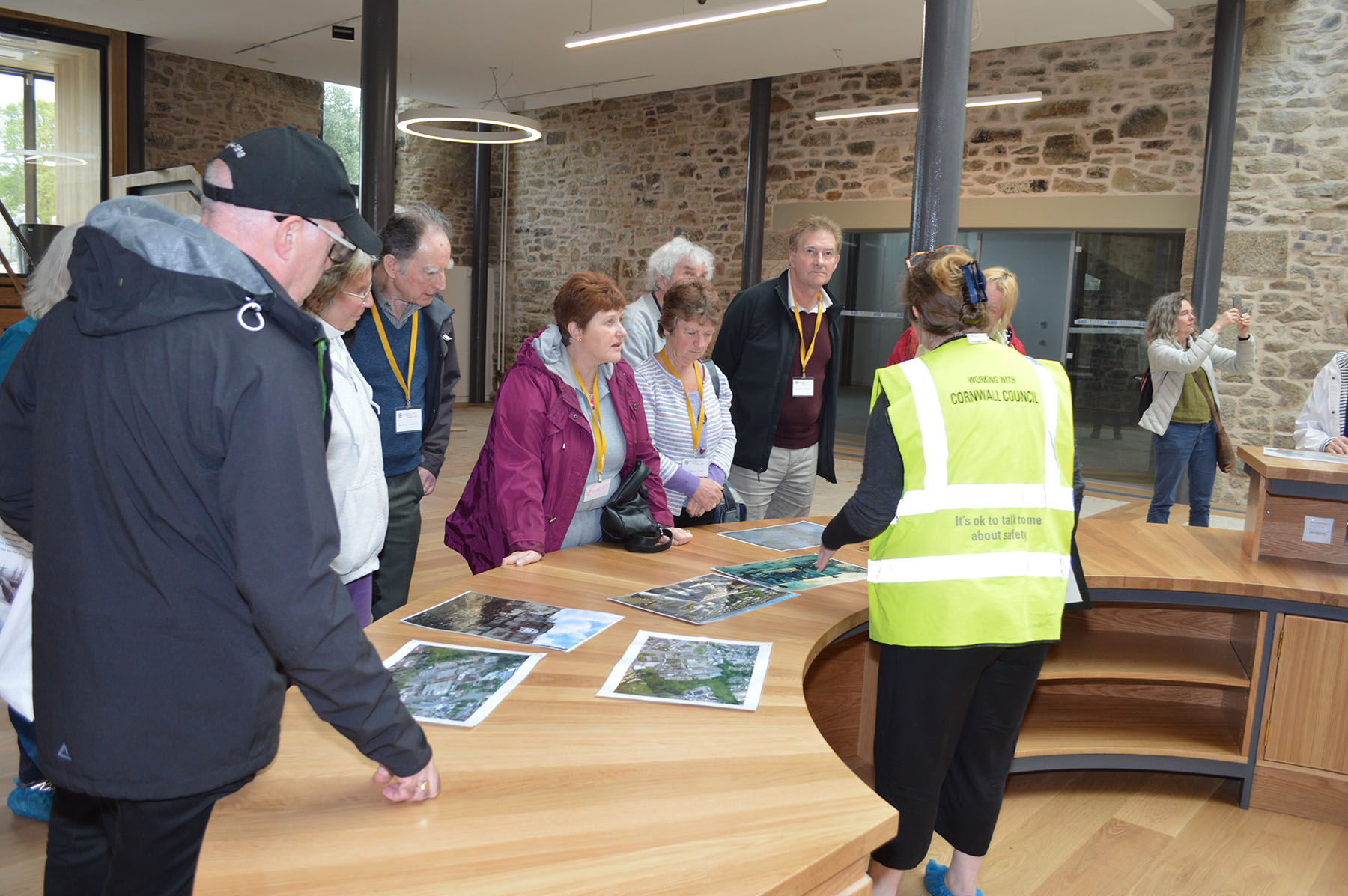 When using the term “social media” this included everything that uses digital technology, promotes social interaction, creates material, and diffuses information. All tools with digital formats were included in this definition – such as websites, blogs, discussion platforms, applications... but also social networks encouraging communication within and between digital communities – such as Facebook, Twitter and other platforms. Speakers considered these digital formats in a global manner, mentioning what was available in their specific Celtic language considering what new technology could and can offer minority languages.

Visits during the week were to the Locmaria part of the city and we had a guided tour of the Faience Pottery Museum. We also visited Landevennec Abbey and Museum and looked around a rebuilt windmill. 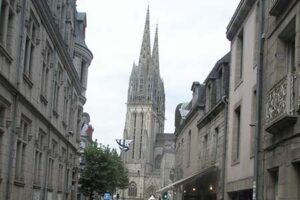 The Cathedral at Kemper 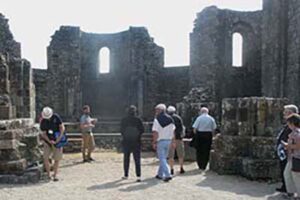 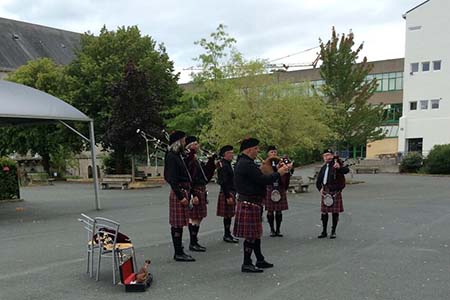 Breton Pipers at the opening of the Congress

Scotland hosted the 2017 International Celtic Congress at Perth. This was attended by all the other branches of the Celtic Congress Breizh (Brittany) Cymru (Wales)  Eire (Ireland) Kernow (Cornwall) Mannin (Isle of Man)

Held between 17th to 22nd July at the The Mercure Hotel, the theme for this Celtic Congress was 'The Musical Traditions of our Celtic Nations'. Activities will consist of lectures, cèilidhs and tours to places of historical interest, which help provide greater insight into the host nations Celtic past with those of the other Celtic nations.

Founded in 1902, the association organises an annual congress and has been since 1949, in its current form

2016: Isle of Man: Integrating Celtic history and culture into the school curriculum

2014: Cardiff, Wales: The legacy of industry in the Celtic countries

2013: Bodmin, Cornwall: Youth and the future of Celtic culture

2005: Oban, Scotland: Revitalization of Languages (Celtic) by the Arts

2003: Dublin, Ireland: Celtic heritage and traditions in a changing world

2002: Carmarthen, Wales: Renewal of the Celtic language in the community

2001: Rennes, Brittany: The place of history in Celtic countries today

1998: Port Erin, Isle of Man: The Economies of the Celtic Countries

1988: Newquay, Cornwall: The Celtic World and the Sea

1981: Lannion, Brittany: The situation of Celtic languages today, and their future

1978: Carmarthen, Wales: The European Community and the Celtic Countries

1977: Stirling, Scotland: The place of the youth in the Celtic countries

1975: St Austell, Cornwall: Tourism and its effects on national life in The Celtic countries

1974: Nantes, Brittany: The cultural rights of the Celtic peoples

The Celtic Congress was founded in 1902 to promote the knowledge, use and enhancement of the languages and cultures of the six Celtic countries. Each year, an International Congress brings together the National Branches of congress to help pursue these goals.

More information can be obtained from the individual branches of the Celtic Congress in Scotland, Brittany, Wales, Ireland, British Cornwall and the Isle of Man.

Action: An international congress meets each year. There are debates on the subject of the year chosen by the host country. Each country in turn receives this Celtic Congress, which only returns each Celtic nation every six years.

The congress is also an opportunity to make decisions and motions at the general meeting. Motions generally concerning the cultural rights of Celtic peoples are addressed to the governments concerned on behalf of the six countries gathered.

The congress may have a variety of topics, with the exception of politics. In addition to the annual international congresses, each national branch is free to organise events or other events. An international office meets at each congress. The Celtic Congress is open to all. In Brittany a special effort is made to encourage the arrival of non-members of the association. This is an opportunity for relations with other associations. The congress is also a meeting place for exchange of ideas and experiences on specific areas, such as school, music, Celtic sports and a multitude of other topics relating to Celtic culture

Each conference has book and record stands in every Celtic language. The Congress is also an occasion for evenings where artists from each participating country perform, evenings open to participants and the public.

The congress is also an opportunity to make widely known the little-known Celtic countries, due to the Jacobean and Latinist orientation of national education.

The Congress is usually held in the summer. However, in British Cornwall and the Isle of Man, it is held at Easter, as these countries do not have a university structure that can host the Congress and therefore have to house participants in hotels.